Leaders of The Church of Jesus Christ of Latter-day Saints called Tuesday for legislation across the United States that protects vital religious freedoms.

At the same time, the Church said it would support legislation where it is being sought to provide protections in housing, employment and some other areas where LGBT people do not have protections, while ensuring that religious freedom was not compromised.

Competing interests between advocates of religious freedom and those seeking to build LGBT rights into law have led to legislative inaction or stalemates with increasing frequency across the United States.

In a news conference (see also summary key points) that included three members of the governing Twelve Apostles and one woman leader of the Church, leaders called for a “fairness for all” approach that balances religious freedom protections with reasonable safeguards for LGBT people — specifically in areas of housing, employment and public transportation, which are not available in many parts of the country.

Elder Oaks said: “Because we are frequently asked for our position on these matters, the Church asserts the following principles based on the teachings of Jesus Christ, and on fairness for all, including people of faith:

Church leaders said that both sides of the debate over religious freedom and nondiscrimination should treat each other with respect.

The Church broadened that position Tuesday by saying it would support such ordinances throughout Utah and the nation as long as there was a balanced approach to protect constitutional religious exercise and conscience.

Elder D. Todd Christofferson affirmed that this appeal to government leaders for a balanced approach between religious and gay rights does not represent a change or shift in doctrine for the Church.

Elder D. Todd Christofferson of the Quorum of the Twelve Apostles conducts a news conference on religious freedom and nondiscrimination at the Conference Center, January 27, 2015. 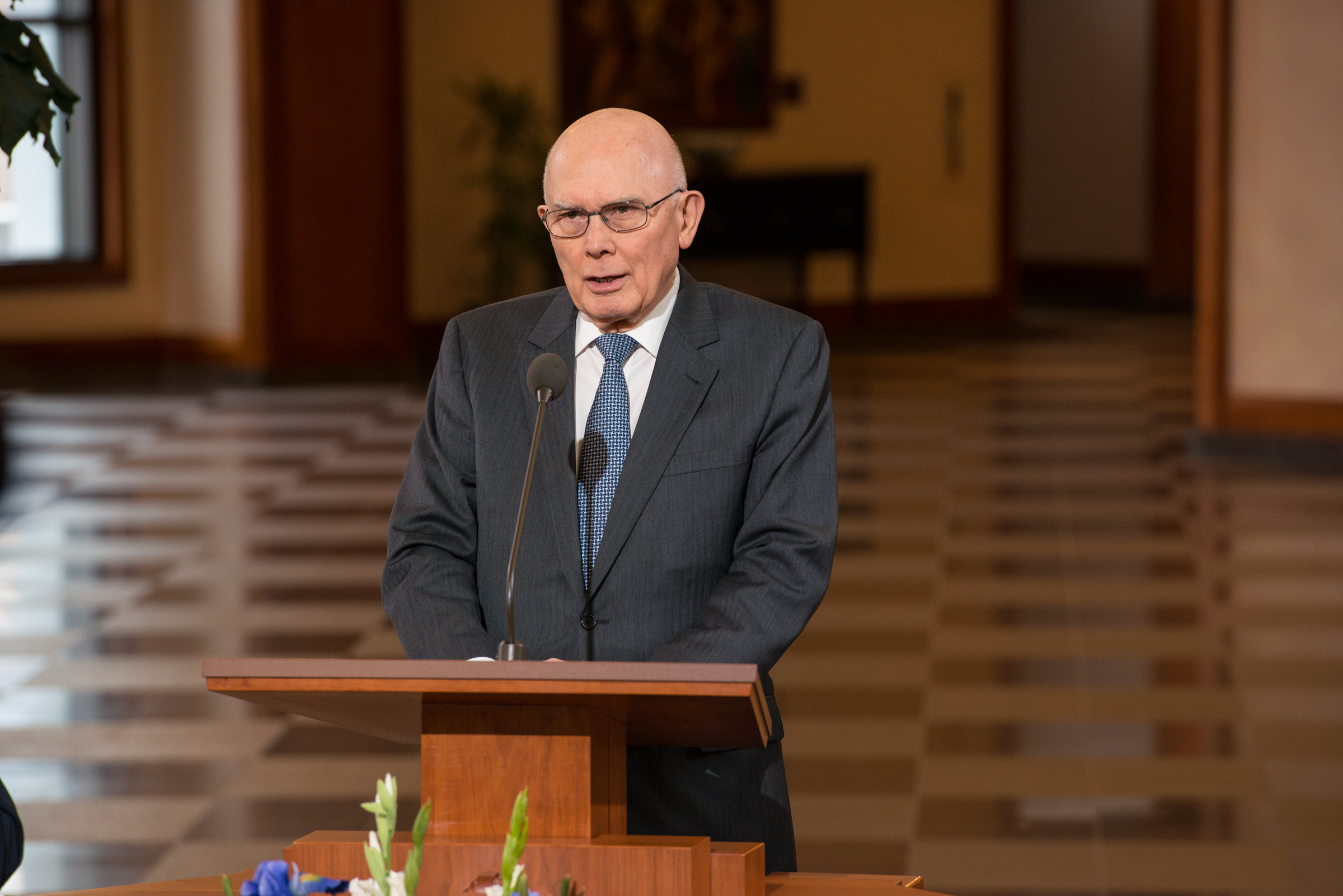 Elder Dallin H. Oaks of the Quorum of the Twelve Apostles speaks at a news conference on religious freedom and nondiscrimination, January 27, 2015.

Elder Oaks said that “those who seek the protection of religious conscience and expression and for the free exercise of their religion look with alarm at the steady erosion of treasured freedoms that are guaranteed in the United States Constitution.”

And he explained: “Since 1791 the guarantees of religious freedom embodied in the First Amendment have assured all citizens that they may hold whatever religious views they want, and that they are free to express and act on those beliefs so long as such actions do not endanger public health or safety. This is one of America’s most cherished and defining freedoms. Yet today we see new examples of attacks on religious freedom with increasing frequency.”

Elder Oaks shared several of those examples. The university system in California, he said, is forcing some groups to compromise their religious conscience if they want recognition for their clubs. And in one of America’s largest cities, lawyers acting for the city government subpoenaed the sermons and notes of pastors who opposed parts of a new antidiscrimination law on religious grounds. Recently, he noted, the head of a large American corporation was forced to resign from his position in a well-publicized backlash to his personal beliefs.

“When religious people are publicly intimidated, retaliated against, forced from employment or made to suffer personal loss because they have raised their voice in the public square, donated to a cause or participated in an election, our democracy is the loser,” Elder Oaks said. “Such tactics are every bit as wrong as denying access to employment, housing or public services because of race or gender.”

Elder Holland said that people of faith must maintain their constitutional right to live their lives in accordance with their deeply held religious beliefs. That includes choosing their profession or employment or serving in public office without intimidation, coercion or retaliation from another group.

Elder Holland said that “accommodating the rights of all people – including their religious rights– requires wisdom and judgment, compassion and fairness. Politically, it certainly requires dedication to the highest level of statesmanship.”  And he added: “Nothing is achieved if either side resorts to bullying, political point scoring or accusations of bigotry. These are serious issues, and they require serious minds engaged in thoughtful, courteous discourse.”

Sister Marriott said during the press conference that The Church of Jesus Christ of Latter-day Saints believes that sexual relations other than between a man and a woman who are married are contrary to the laws of God. “This commandment and doctrine comes from sacred scripture and we are not at liberty to change it,” she said. “But, God is loving and merciful. His heart reaches out to all of His children equally and He expects us to treat each other with love and fairness.”

The Church’s approach represents a desire to bring people together to encourage mutually respectful dialogue. Sister Marriott stressed, “We are at our best as fellow citizens when the push-pull of different viewpoints, freely and thoroughly aired in national debate, leads ultimately to compromise and resolution and we move on as a nation, stronger than before.”